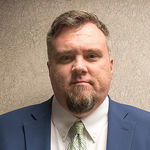 Crawford Ellsworth grew up in Chesapeake, Virginia.  He graduated from Hickory High School in 2001.  He graduated from Old Dominion University in 2006, majoring in Political Science and minoring in Business Administration.  He went on to graduate from Appalachian School of Law in 2010, passing the Virginia Bar Exam later that fall.

Crawford was an Assistant Commonwealth's Attorney for Buchanan County from January 2012 until November 2020.  He regularly practiced in General District, Juvenile & Domestic Relations, and Circuit Courts.  He handled numerous cases of various types, ranging from traffic cases to violent felonies.  He is on Brief for the Commonwealth before both the Virginia Court of Appeals and the Virginia Supreme Court.  He received the Career Prosecutor designation in 2017.  He was also the Buchanan County Drug Court and Community Service Diversion Program Prosecutor from 2017 until November 2020.

Crawford was the Buchanan County Bar Association Treasurer in 2012 and then served as President from 2013 until November 2020.  He was also active in the Buchanan County Mountain Movers Association, which is a faith-based association that focuses on serving those people who are impacted by drug addiction and educating the public on the impact and how to prevent drug addiction and drug overdoses. He served as a founding member and was elected as the first President of that association.

Thank you for contacting us. We will get back to you shortly.

Please complete all required fields below.

We offer a free consultation and we’ll gladly discuss your case with you at your convenience. Contact us today to schedule an appointment.